Attraction at the Atomic Level 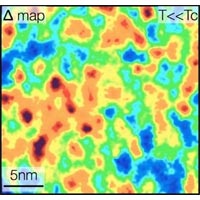 The two figures show the results obtained with a specialized scanning tunneling microscope at temperatures well above and well below when the electrons pair up in high-temperature superconductors. The top figure shows an atomic scale map of the strength for pairing of electrons while superconducting--red shows the strongest pairing regions, blue the weakest. The bottom figure shows a measurement related to electron-electron interaction on the exact same atomic sites at a temperature well above the superconducting transition temperature when electrons repel one another. The surprising connection between these two measurements is the main finding of the paper published in Science by the team from Princeton University.

Countless romance novels begin with a hero and heroine who initially repel each other, only to find them thrown together in uncomfortable circumstances and ultimately rejoicing as their antagonism switches to ardor.

Odd as it seems, this tried-and-true romantic formula may also describe the scintillating secret behind the science of superconductivity--the phenomenon that occurs when materials conduct electricity across huge distances without losing any energy due to resistance from the transporting medium.

'It appears that the electrons with the strongest repulsion in one situation are the most adept at superconductivity in another,' said Ali Yazdani, professor of physics at Princeton University and lead author on a paper just published in Science. 'It's counterintuitive, but that's what's happening.'

This research was funded by the National Science Foundation (NSF) Materials Research Science and Engineering Centers Program through the Princeton Center for Complex Materials, and by a Major Research Instrumentation Award from NSF.

These research results are of fundamental importance, said NSF Program Manager Charles Bouldin. 'By showing that a fundamentally different electron pairing mechanism exists in high-temperature superconductors, this work will move the field in new directions, and will help find new materials to investigate.'

Superconductivity was first discovered in 1911 in mercury when the material was cooled to the temperature of liquid helium, 4 degrees Kelvin or minus 452 degrees Fahrenheit. Scientists in later years would come to understand low-temperature superconductivity as a phenomenon that occurs when electrons interact with vibrations of the material's lattice structure and join into pairs that are able to travel through a conductor without being scattered by atoms.

High-temperature superconductors such as copper oxide were discovered in 1986. They become superconducting at 150 degrees Kelvin or minus 253 degrees Fahrenheit. They can be cooled with liquid nitrogen, which is cheaper than liquid helium, making them of greater interest to industry.

But do electrons bond in these materials, scientists have wondered, the same general way as in the lower temperature materials? The team with the new results says, 'No.'

The Princeton scientists say that high-temperature superconductivity does not hinge on a magical glue binding electrons together. The secret to superconductivity, they say, may rest instead on electrons' ability to take advantage of their natural repulsion in a complex situation.

Having developed the ability to measure with high precision how nature allows electron pairs to form, the team, which included postdoctoral fellow Abhay Pasupathy and graduate students Aakash Pushp and Kenjiro Gomes, looked to see if there were other types of experimental signatures that could give clues to the mechanism of pairing. They found that when the samples were heated up to very high temperatures at which electrons no longer paired up, the electrons that had been superconducting at colder temperatures exhibited unique quantum properties at warmer temperatures indicating they possessed extremely strong repulsive forces.

The Princeton team used a specialized scanning tunneling microscope to measure with high precision how nature allows electron pairs to form. 'What we have found is that the traditional signatures of what some might call the 'glue' are there--we can measure them with high accuracy on the atomic scale,' Yazdani said. 'They don't control the formation of the superconducting pairs, though. They are more like spectators.'

Additional funding came from the U.S. Department of Energy.

'I want to know God's thoughts...the rest are details.'