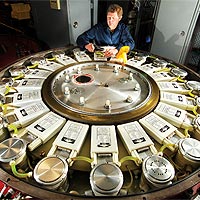 An electrical circuit that should carry enough power to produce the long-sought goal of controlled high-yield nuclear fusion and, equally important, do it every 10 seconds, has undergone extensive preliminary experiments and computer simulations at Sandia National Laboratories’ Z machine facility.

Z, when it fires, is already the largest producer of X-rays on Earth and has been used to produce fusion neutrons. But rapid bursts are necessary for future generating plants to produce electrical power from sea water. This had not been thought achievable till now.

How does it work?

An automobile engine that fired one cylinder and then waited hours before firing again wouldn’t take a car very far.

Similarly, a machine to provide humanity unlimited electrical energy from cheap, abundant seawater can’t fire once and quit for the day. It must deliver energy to fuse pellets of hydrogen every 10 seconds and keep that pace up for millions of shots between maintenance — a kind of an internal combustion engine for nuclear fusion. That’s so, at least, for the fusion method at Sandia National Laboratories’ Z machine and elsewhere known as inertial confinement.
LTD check-out Sandians Dillon McDaniel (second from left) and Steve Glover (right) with Alexandar Kim (HCEI, Tomsk, Russia) examine a 500- kilo-amp LTD for final check-out before shipment from Siberia to Sandia (person on far left is Sandia-hired interpreter; Roman Kahn). The LTD has been in testing at Sandia for the last 2.5 years.
Download 300dpi JPEG image, “LTD-check-out.jpg,” 2.1MB (Media are welcome to download/publish this image with related news stories.)

But, unable to produce fusion except episodically, the method has been overshadowed by the technique called magnetic confinement — a method that uses a magnetic field to enclose a continuous fusion reaction from which to draw power.

The electrical circuit emerging from the technological hills may change the balance between these systems. Tagged as “revolutionary” by ordinarily conservative researchers, it may close the gap between the two methods.

The circuit is easily able to fire every 10.2 seconds in brief, powerful bursts.

“This is the most significant advance in primary power generation in many decades,” says Keith Matzen, director of Sandia’s Pulsed Power Center.

The new system, called a linear transformer driver (LTD), was created by researchers at the Institute of High Current Electronics in Tomsk, Russia, in collaboration with colleagues at Sandia.

Says Rick Stulen, Sandia Vice President for Science, Technology and Research Foundations, “This new technology not only represents a remarkable technical advance but also demonstrates the strong engagement of Sandia's scientists and engineers in the international community.”

The large-cherry-lifesaver path to nuclear fusion

The circuit — a switch tightly coupled to two capacitors — is about the size of a shoebox and is termed a “brick.” When bricks are tightly packed in groups of 20 and electrically connected in parallel in a circular container resembling a large cherry lifesaver, the aggregate, or “cavity” as the physicists would have it, can transmit a current of 0.5 megamperes at 100 kilovolts.

Because the cavities are modular, they can be stacked like donuts on a metal prong called a stalk. Arranged in a suitable configuration, they could generate 60 megamperes and six megavolts of electrical power, enough (theoretically) to generate high-yield nuclear fusion within the parameters necessary to run an electrical power plant.

The next-generation cavity model, now being tested in Tomsk, transmits 1.0 megamperes at the same voltage and with the same rapidity. Five such units have been built; four have been purchased by Sandia, and one by the University of Michigan. The units cost $160,000 each. They too, according to Sandia scientist and project leader Mike Mazarakis, who supervised the tests at the Siberian site, are performing without flaw.

“This is an amazing achievement,” says Sandia Vice President Gerry Yonas, a former leader at Z and of Sandia’s Advanced Concepts Group.

Advantages of the new technology

Happily for Sandia accountants but sadly to those who love the widely distributed arcs-and-sparks photo of Z firing by Sandia photographer Randy Montoya, the new switch eliminates the need for the hundreds of thousands of gallons of insulating water and oil carried by the present Z structure. It was over the surface of that water that the electrical arcing of Z became a phenomenon as much appreciated by graphic artists as it was loathed by engineers (who saw it as wasted energy). Also gone will be much of Z’s intricate switching. All were needed to shorten to nanoseconds the machine’s original microsecond pulse.

The linear transformer driver produces its 100-nanosecond pulse from the get-go. It works so well because its design lowers inductances that ordinarily slow electrical transmission.
insulators Dillon McDaniel examines insulators that go between capacitor layers for 250, 500, and 1000 kilo-amp LTDs.
Download 300dpi JPEG image, “insulators.jpg,” 1.4MB (Media are welcome to download/publish this image with related news stories.)

It does this in part by eliminating the huge plates and extensive wiring in the current Z machine, all of which generate magnetic fields. In the new system, each brick has almost no wiring. Two capacitors about the size of small thermos bottles are tightly linked to a switch the size of a lunchbox. There is little opportunity to generate magnetic fields that slow the passage of current.

Further, linking the bricks in parallel in a cavity not only adds currents, but decreases inductances to levels significantly less than previously possible.

The subsets are then linked in series to add voltages.

This allows a very powerful machine to fire very rapidly, with only a thin layer of oil bathing the rings and rows of switches.

The LTD technology is 50 percent more efficient than current Z machine firings, in terms of the ratio of useful energy out to energy in. Z is currently 15 percent efficient to its load (already a very high efficiency among possible fusion machines).

There is, however, a small matter of cost.

Funding for Z historically has been for defense purposes: Its experiments are used to generate data for simulations on supercomputers that help maintain the strength, effectiveness, and safety of the US nuclear deterrent. Even without its rapid repetition capability, a powerful LTD machine would better simulate conditions created by nuclear weapons, so that data from the laboratory-created explosion of Z firing could be used with greater certainty in computer simulations regarding nuclear weapons. The US has refrained from actual testing of nuclear weapons for 15 years.

But fired repeatedly, the machine could well be the fusion machine that could form the basis of an electrical generating plant only two decades away. Progress in this arena might eventually require funding from DOE’s energy arm.

To confirm the new Z concept would take $35 million over five to seven years to build a test bed with 100 cavities. If successful, future generations of Z-like facilities would be constructed with LTDs.

“It’s like building a tinker toy,” says Matzen. “We think we need 60 megamperes to make large fusion yields. But though our simulations show it can be done, we won’t know for certain until we actually build it.”

The device was designed by Tomsk pulsed-power head Alexander Kim with the switch developed by Boris Kovalchuk; its speed-up from a microsecond to 100 nanosecond firing was urged by Sandia manager Dillon McDaniel, and encouraged by Sandia managers Rick Spielman and Ken Struve; the work was led at Sandia and Tomsk by Sandia researcher Mike Mazarakis; testing at Sandia was by Bill Fowler and Robin Sharpe; the Z-IFE fusion energy program at Sandia was initiated and is managed by Craig Olson.

Recent results on LTD development will be presented at the IEEE International Pulsed Power Conference and the IEEE Symposium on Fusion Engineering to be held in Albuquerque in June 2007.

Sandia has filed a patent application on a high-power pulsed-power accelerator invented by William Stygar that can use an LTD as the primary power generator to replace the conventional Marx generator.