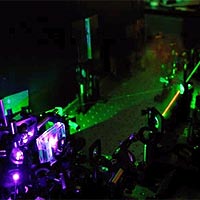 Photo depicts some of the apparatus used to make the three-photon state. At upper right (the black box peeking in from the edge of the frame) is the laser that produces 810nm photons (that's an infrared wavelength, but close enough to the visible part of the spectrum that you can still see it as the red beam in the photo). Most of the infrared beam is focused into a doubling crystal, inside the protective box at lower left, to produce violet photons. The violet photons are directed into the 'downconversion crystal', which is the brightest spot at lower left. Inside the downconversion crystal sometimes a violet photon will split in two, forming a pair of infrared photons, each with wavelength 810 nm. At the same time, a very small amount of the infrared beam is split off, to give a third photon. Outside the picture, these three photons are combined into a single beam of entangled photons in a state.

Photo courtesy of University of Toronto.

U of T physicists have developed a way to entangle photons which could ultimately lead to an extremely precise new measurement system.

Their study appears in the May 13 issue of the journal Nature. The findings could ultimately prove useful in developing ways to measure gravitational waves or the energy structure of atoms, and could also help in the development of "quantum computers." (Quantum computers work according to the principles of quantum mechanics, which describes atoms, photons, and other microscopic objects.)

Previous studies have theorized that quantum computers using entangled photons could perform calculations far more quickly than current computers. "We know that today's computers are approaching limits of size and speed," says lead author and post-doctoral fellow Morgan Mitchell. "Quantum computing offers a possible way to move beyond that. Our research borrows some tricks from quantum computing and applies them to precision measurement."

Mitchell, working with Professor Aephraim Steinberg and graduate student Jeff Lundeen, first prepared three photons each with a different state of polarization. The researchers directed one photon along a main pathway or "beam," then added a second photon. If researchers determined that both photons continued down the main beam, they concluded the two had become entangled. A third photon, with yet another polarization, was then added.

The team was able to create a three-photon state in 58 per cent of their attempts. "Nobody has taken three distinct photons and made a three-photon entangled state before," he says. The entire process occurred within nanoseconds over a physical span of less than a metre.

The researchers then demonstrated the use of the three-photon entangled state to make extremely precise measurements. To do so, they used an experiment based on a paradox associated with quantum mechanics, which suggests that a particle can be in two places at once.

By observing the movement of the photons past a series of mirrors and filters, the team was able to determine how far the photons had traveled.

Because the team used photons in a three-photon state, the system could provide measurements that were three times as precise as those made by a single photon. Since the new system, in theory, could incorporate an even larger number of photons, it could someday lead to a measurement system with significantly greater accuracy than anything that currently exists. The next step could be a practical test involving a measurement, says Mitchell.

'If you would be a real seeker after truth, it is necessary that at least once in your life you doubt, as far as possible, all things.'