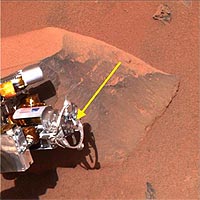 This image shows the Mars Exploration Rover Spirit's 'hand,' or the tip of the instrument deployment device, poised in front of the rock nicknamed Adirondack, the rover's first science target since developing communication problems over two weeks ago. In preparation for grinding into Adirondack, Spirit cleaned off a portion of the rock's surface with a stainless steel brush located on its rock abrasion tool and seen here at the end of the yellow arrow. The image was taken by the rover's panoramic camera.

NASA's Spirit has returned to full health and resumed doing things never attempted on Mars before.

Spirit temporarily stopped communicating Jan. 22; the problem was later diagnosed as a memory-management issue. Engineers regained partial control of the spacecraft within days and reformatted Spirit's flash memory Wednesday to prevent recurrence of the problem.

JPL's Glenn Reeves, flight software architect for the Mars Exploration Rovers, said Friday, "We're confident we know what the problem is, and we have a procedure in place we believe can work around this problem indefinitely."

Spirit's first day of science operations after the memory reformatting featured the first brushing of a rock on a foreign planet to remove dust and allow inspection of the rock's cleaned surface. Steel bristles on the rover's rock abrasion tool cleaned a circular patch on the rock unofficially named Adirondack. The tool's main function is to grind off the weathered surface of rocks with diamond teeth, but the brush for removing the grinder's cuttings can also be used to sweep dust off the intact surface.

The brushing on Thursday was the first use of a rock abrasion tool by either Spirit or its twin rover, Opportunity. The brush swirled for five minutes, said Stephen Gorevan of Honeybee Robotics, New York, lead scientist for the rock abrasion tools on both rovers.

"I didn't expect much of a difference. This is a big surprise," Gorevan said about a picture showing the brushed area is much darker than the rest of the rock's surface. "Ladies and gentlemen, I present you the greatest interplanetary brushing of all time."

One reason scientists first selected Adirondack for close inspection is because it appeared relatively dust free compared to some other rocks nearby. "To our surprise, there was quite a bit of dust on the surface," said Dr. Ken Herkenhoff of the U.S. Geological Survey's Astrogeology Team, Flagstaff, Ariz., lead scientist for the rovers' microscopic imagers.

Spirit was instructed Friday afternoon to grind the surface of Adirondack with the rock abrasion tool. After the grinding, the turret of tools at the end of the rover's robotic arm will be rotated to inspect the freshly exposed interior of the rock. Controllers plan to tell Spirit tomorrow to begin driving again.

Meanwhile, halfway around Mars, NASA's Opportunity drove early Friday for the second day in a row. It arrived within about a half a meter (20 inches) of the northeastern end of a rock outcrop scientists are eager for the rover to examine. "We expect to complete that approach tomorrow," said JPL's Matt Wallace, mission manager for Opportunity.

During Friday's drive, Opportunity did not travel as far as planned. The rover is climbing a slope of about 13 degrees, and the shortage in distance traveled is probably due to slippage in the soil, Wallace said.

The main task for both rovers is to explore the areas around their landing sites for evidence in rocks and soils about whether those areas ever had environments that were watery and possibly suitable for sustaining life.

JPL, a division of the California Institute of Technology in Pasadena, manages the Mars Exploration Rover project for NASA's Office of Space Science, Washington, D.C. Images and additional information about the project are available from JPL at http://marsrovers.jpl.nasa.gov and from Cornell University at http://athena.cornell.edu.