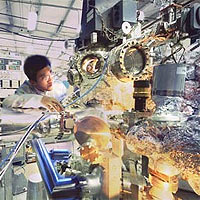 SPEAR stands for Stanford Positron Electron Asymmetric Ring. SPEAR3 was formally opened at a dedication ceremony at the Stanford Linear Accelerator Center (SLAC) on Jan. 29. It incorporates the latest technology -- much of it pioneered at SSRL and SLAC -- to make it competitive with the best synchrotron sources in the world.

Some 2,000 scientists from around the country will use SPEAR3's extremely bright x-ray light each year to illuminate the long-kept secrets of materials, chemical and biological matter.

Synchrotron light has revolutionized our view into the sub-microscopic world and has contributed to major innovations in fields such as solid-state physics, materials science, environmental sciences, structural biology and chemistry. Synchrotron light is created when electrons traveling the speed of light take a curved path around a storage ring, a structure in which high-energy particles can be circulated many times and thus "stored." The electrons emit electromagnetic light in x-ray through infrared wavelengths. The resulting light beam has characteristics that make it ideal for revealing the intricate architecture and utility of many kinds of matter.

"This facility will be crucial to advancing the field of structural biology, which is growing in importance to the NIH [National Institutes of Health] mission, by enabling cutting-edge targeted drug design projects and major efforts such as the Protein Structure Initiative and the Structural Biology arm of the NIH Roadmap," said Dr. Elias Zerhouni, NIH director. "From its very genesis as a joint project between NIH and DOE [Department of Energy], this new facility exemplifies the collaborative nature of science and the productive cross-fertilization between biological and physical disciplines."

Said SSRL physicist John Arthur: "SPEAR3's brilliant x-ray beams provide the ability to study smaller objects at higher resolution. In many cases the greater brightness at SPEAR3 will also enable researchers to take their data faster, do more difficult experiments and use smaller samples of material."

Noted Abraham: "This is the first time the Department of Energy and the National Institutes of Health have joined in funding an accelerator research facility."

Thirty years ago, SSRL was among the first laboratories in the world to use synchrotron produced x-rays for studying matter at atomic and molecular scales, and the first to offer beam time to a broad community of scientists from academic, industry and government labs submitting research proposals for peer review. The original SPEAR ring, built for particle physics programs at SLAC, yielded two Nobel prizes and provided fertile ground for innovating synchrotron techniques and making important discoveries. SPEAR3 is a complete rebuild and upgrade of the SPEAR2 ring, which was the original ring adapted for improved performance in synchrotron radiation research.

Lines extend from the ring to carry synchrotron radiation to experimental stations. The new ring has the capacity to easily add eight to 10 more beam lines, with associated experimental stations, beyond the existing 11 beam lines. A $14.2 million gift from the Gordon and Betty Moore Foundation to the California Institute of Technology, announced Jan. 28, will allow scientists at Caltech and Stanford to collaborate on the building of a designated beam line at SPEAR3 for structural molecular biology research. The exceptional quality and brightness of SPEAR3's x-ray light is perfectly suited to studying complicated biological systems.

The first electron beams circulated in the new SPEAR3 ring in mid-December 2003, and the first experiments are scheduled to begin in March.

"SPEAR3 is a remarkable resource that will enable state-of-the-art science in numerous fields," said SSRL Director and Stanford Professor Keith Hodgson. "The $58 million project was completed on time and on budget. I thank the people whose extraordinary teamwork made the project successful. In a remarkable accomplishment, the old accelerator was dismantled, a new tunnel floor poured, SPEAR3 installed and commissioned, and users back online -- all within a mere 11 months."

'Strange is our situation here upon the earth. Each of us comes for a short visit, not knowing why, yet sometimes seeming to divine a purpose.'