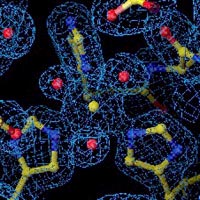 Now this quest will be enhanced by a $14,206,289 gift from the Gordon and Betty Moore Foundation to the California Institute of Technology, which will allow scientists at Caltech and Stanford University to collaborate on the building of a molecular observatory for structural molecular biology.

The observatory, to be built at Stanford, is a kind of ultrapowerful X-ray machine that will enable scientists from both institutions and around the world to "read" the blueprints of so-called macromolecules down at the level of atoms. Macromolecules, large molecules that include proteins and nucleic acids (DNA and RNA), carry out the fundamental cellular processes responsible for biological life. By understanding their makeup, scientists can glean how they interact with each other and their surroundings, and subsequently determine how they function. This knowledge, while of inherent importance to the study of biology, could also have significant practical applications, including the design of new drugs.

The foundation of this discovery process, says Doug Rees, a Caltech Professor of Chemistry and an investigator for the Howard Hughes Medical Institute, and one of the principal investigators of the project, is that "if you want to know how something works, you first need to know what it looks like.

"That's why we're excited about the molecular observatory," he says, "because it will allow us to push the boundary of structural biology to define the atomic-scale blueprints of macromolecules that are responsible for these critical cellular functions. This will include the technically demanding analyses of challenging biochemical targets, such as membrane proteins and large macromolecular assemblies, that can only be achieved using such a high-intensity, state of the art observatory."

The primary experimental approach for structural molecular biology is the use of X-ray beams, which can illuminate the three-dimensional structure of a molecule. It does this by blasting a beam of x-rays through a crystallized sample of the molecule, then analyzing the pattern of the scattered beam. According to Keith Hodgson, a Stanford professor and director of the facility where the new observatory will be build, "synchrotrons are powerful tools for such work, because they generate extremely intense, focused X-ray radiation many millions of times brighter than available from a normal x-ray tube." Synchrotron radiation is comprised of the visible and invisible forms of light produced by electrons circulating in a storage ring at nearly the speed of light. Part of the spectrum of synchrotron radiation lies in the x-ray region; the radiation is used to investigate various forms of matter at the molecular and atomic scales, using approaches in part pioneered by Linus Pauling during his time as a faculty member at Caltech in the fifties and sixties.

The new observatory, in technical terms called a beam line, will make use of the extremely bright x-rays produced by a newly installed advanced electron accelerator that is located at Stanford's Synchrotron Radiation Laboratory (SSRL) on the Stanford Linear Accelerator site (SLAC). The exceptional quality and brightness of the x-ray light from this new accelerator is perfectly suited to the study of complicated biological systems. The Foundation gift will be used by Caltech and the SSRL to design and construct a dedicated beam line at SSRL for structural molecular biology research. The x-ray source itself will be based upon a specialized device (called an in-vacuum undulator) that will produce the x-rays used to illuminate the crystalline samples. Specially designed instruments will allow fully automated sample manipulation via a robotic system and integrated software controls. Internet-based tools will allow researchers at Caltech or remote locations to control the experiments and analyze data in real time. An on-campus center to be built will facilitate access by faculty and students to the new beam line.

Knowing the molecular-scale blueprint of macromolecules will ultimately help answer such fundamental questions as "How are the chemical processes underlying life achieved and regulated in cells?" "How does a motor or pump work that is a millionth of a centimeter in size?" "How is information transmitted in living systems?"

"The construction of a high-intensity, state-of-the-art beam line at Stanford, along with an on-campus center here at Caltech to assist in these applications, will complement developments in cryo-electron microscopy that are underway on campus, also made possible through the support of the Gordon and Betty Moore Foundation," notes Caltech provost Steven Koonin.

The SSRL at Stanford is a national user facility operated by the U.S. Department of Energy's Office of Science. "I would like to thank the Gordon and Betty Moore Foundation for this generous gift [to Caltech]," said Dr. Raymond L. Orbach, director of the Office of Science, which oversees the SLAC and the SSRL. "This grant will advance the frontiers of biological science in very important and exciting ways. It also launches a dynamic collaboration between two great universities, Caltech and Stanford, at a Department of Energy research facility, thereby enhancing the investment of the federal government."

The Gordon and Betty Moore Foundation was established in November 2000, by Intel co-founder Gordon Moore and his wife Betty. The Foundation funds outcome-based projects that will measurably improve the quality of life by creating positive outcomes for future generations. Grantmaking is concentrated in initiatives that support the Foundation's principal areas of concern: environmental conservation, science, higher education, and the San Francisco Bay Area.

'What a wonderful and amazing scheme have we here of the magnificent vastness of the Universe! So many Suns, so many Earths ...!'