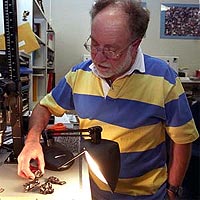 Korotev is a geochemist whose specialty is analyzing the chemistry of Moon rocks, whether they have been gathered from the Apollo missions or collected as meteorites from Antarctica or north Africa or other areas of the world. In recent years, he's become the go-to guy for anybody — researcher, amateur or professional meteorite collector — who thinks he might have discovered a lunar meteorite because of a Web site he started about 10 years ago that deals in great detail with lunar meteorites.

The mysterious orb you find in your backyard that wasn't there just the day before has to be a meteorite, right?

Korotev intended for the site to serve his colleagues and the interested public, and it is as good an educational site on the topic to be found anywhere. With the advent of very intelligent search engines, an aggressive, though little known profession of meteorite dealers — a lunar meteorite retails from $1,000 a gram to $40,000 a gram — and hobbyists, Korotev's site began drawing questions from the public about the veracity of their findings. Some people make appointments to see him and other Washington University geologist colleagues, but the vast majority e-mail pictures of their findings to get their answers. While he didn't keep count of all the contacts he received in the early years, last year alone he received 900 meteorite queries.

'I felt obliged to answer people's questions and in the process of doing so, found that I was saying the same thing over and over again,' Korotev explained. 'Now, I like to build Web sites and I like photography, so I came up with the idea of a Web site that could explain both verbally and visually that your sample is not a meteorite because. . . There are scores of reasons.'

'A Photo Gallery of Meteorwrongs' (http://epsc.wustl.edu/admin/resources/meteorites/meteorwrongs/meteorwrongs.htm) showcases more than 100 objects misidentified as meteorites. Click on the photo and a caption comes up alongside the object explaining why the rocks probably are not meteorites and suggesting what it most likely is and why. The site provides criteria for recognizing space objects. For instance, freshly fallen meteorites will have a fusion crust, a glassy coating that forms on the object during descent. Meteorites also usually are not angular because during their descent protuberances tend to be ablated away coming through the atmosphere.

Korotev said there is a growing body of meteorite collectors who, like stamp or baseball card collectors, are seeking samples of every known lunar or Martian meteorite documented — that's only between 35 and 40 lunar meteorites. Also, people seek meteorite samples for novelties.

'I've had two young men tell me they want some grams of a lunar meteorite for their fiancé's engagement ring,' he said. 'My reaction is: Lunar meteorites are not that attractive, get her a diamond. Besides they were formed on a planet that doesn't have water, which means that they're unstable in water, and that's not the sort of thing you want to put in a ring if your fiancé ever wants to wash her hands.'

Korotev said that lunar rocks are depleted in volatile elements and compared to Earth rocks they are low in sodium, potassium, and rubidium, though high in chromium. There are about 12 different chemical signatures that indicate a lunar source. Martian meteorites share some of the same features as lunar ones, except that Martian meteorites are never rich in feldspar, like most lunar meteorites.

Often, Korotev and his colleagues can do simple, quick tests to determine if a rock has meteorite potential. If a rock has layers, strike it — to have layers, gravity is needed. If the rock has low density, it can't be a meteorite, and he can determine this with a quick lab test.

Still, people want him to confirm that what they have is a meteorite.

'I've heard this over and over again,' Korotev said. 'I heard a thump and went outside and found this rock that wasn't here yesterday.' I can't help noticing that every single rock that people show me or send me a picture of that 'wasn't here yesterday' is just about the size of a hardball. More than likely, it was chucked into the yard by some mischief maker.'

Korotev said the public can purchase very small samples of legitimate lunar or Martian meteorites on E-Bay. Big samples of 'regular' — asteroidal — meteorites also can be purchased, and there are museums, and dealers who can confirm or deny meteorite designation, and a laboratory in northern Arizona that, for a fee, will do a complete petrographic — analysis of thin sections of the sample under a microscope — analysis of rock samples to determine if they are meteorites. He has the site up to help people and to engage them in science, and he gets a wide range of responses.

'I had a fellow ask: Do two meteorwrongs make a meteorite?' he said. 'I've had wonderful conversations with schoolchildren in the Phillipines and housewives in Scotland, but there are some people who are so convinced that they have a meteorite that they end up not liking me. I have a place on the site that suggests that before sending to me, read some of the responses I've gotten from people who don't accept our conclusions. There are some pretty outspoken people who think that I'm an idiot. The truth is, it appears human nature just doesn't like to accept the easy explanation.'