How to Escape a Black Hole 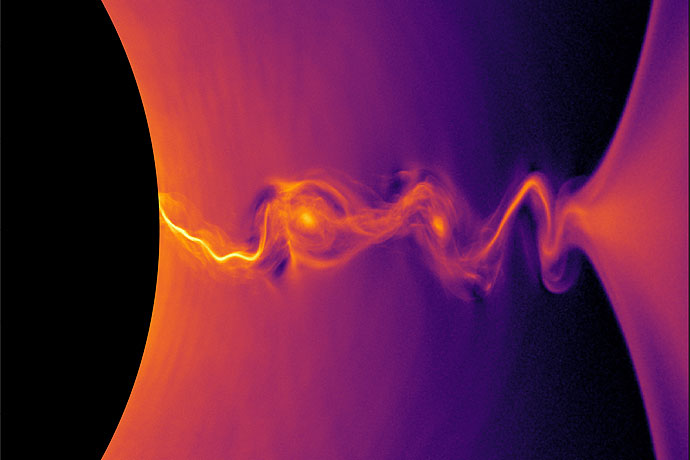 Black holes are known for their voracious appetites, binging on matter with such ferocity that not even light can escape once it’s swallowed up.

Less understood, though, is how black holes purge energy locked up in their rotation, jetting near-light-speed plasmas into space to opposite sides in one of the most powerful displays in the universe. These jets can extend outward for millions of light years.

New simulations led by researchers working at the Department of Energy’s Lawrence Berkeley National Laboratory (Berkeley Lab) and UC Berkeley combine decades-old theories to provide new insight about the driving mechanisms in the plasma jets that allow them to steal energy from black holes’ powerful gravitational fields and propel it far from their gaping mouths.

The simulations could provide a useful comparison for high-resolution observations from the Event Horizon Telescope, an array that is designed to provide the first direct images of the regions where the plasma jets form.

The telescope will enable new views of the black hole at the center of our own Milky Way galaxy, as well as detailed views of other supermassive black holes.

“How can the energy in a black hole’s rotation be extracted to make jets?” said Kyle Parfrey, who led the work on the simulations while he was an Einstein Postdoctoral Fellow affiliated with the Nuclear Science Division at Berkeley Lab. “This has been a question for a long time.”

Now a senior fellow at NASA Goddard Space Flight Center in Maryland, Parfrey is the lead author of a study, published Jan. 23 in Physical Review Letters, that details the simulations research.

The simulations, for the first time, unite a theory that explains how electric currents around a black hole twist magnetic fields into forming jets, with a separate theory explaining how particles crossing through a black hole’s point of no return – the event horizon – can appear to a distant observer to carry in negative energy and lower the black hole’s overall rotational energy.

It’s like eating a snack that causes you to lose calories rather than gaining them. The black hole actually loses mass as a result of slurping in these “negative-energy” particles.

Computer simulations have difficulty in modeling all of the complex physics involved in plasma-jet launching, which must account for the creation of pairs of electrons and positrons, the acceleration mechanism for particles, and the emission of light in the jets.

Berkeley Lab has contributed extensively to plasma simulations over its long history. Plasma is a gas-like mixture of charged particles that is the universe’s most common state of matter.

Parfrey said he realized that more complex simulations to better describe the jets would require a combination of expertise in plasma physics and the general theory of relativity.

“I thought it would be a good time to try to bring these two things together,” he said.

Performed at a supercomputing center at NASA Ames Research Center in Mountain View, California, the simulations incorporate new numerical techniques that provide the first model of a collisionless plasma – in which collisions between charged particles do not play a major role – in the presence of a strong gravitational field associated with a black hole.

The simulations naturally produce effects known as the Blandford-Znajek mechanism, which describes the twisting magnetic fields that form jets, and a separate Penrose process that describes what happens when negative-energy particles are gulped down by the black hole.

The Penrose process, “even though it doesn’t necessarily contribute that much to extracting the black hole’s rotation energy,” Parfrey said, “is possibly directly linked to the electric currents that twist the jets’ magnetic fields.”

While more detailed than some earlier models, Parfrey noted that his team’s simulations are still playing catch-up with observations, and are idealized in some ways to simplify the calculations needed to perform the simulations.

The team intends to better model the process by which electron-positron pairs are created in the jets in order to study the jets’ plasma distribution and their emission of radiation more realistically for comparison to observations. They also plan to broaden the scope of the simulations to include the flow of infalling matter around the black hole’s event horizon, known as its accretion flow.

“We hope to provide a more consistent picture of the whole problem,” he said.