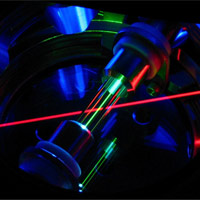 A clock accurate to within a tenth of a second over 14 billion years – the age of the universe – is the goal of research being reported this week by scientists from three different institutions. To be published in the journal Physical Review Letters, the research provides the blueprint for a nuclear clock that would get its extreme accuracy from the nucleus of a single thorium ion.

Such a clock could be useful for certain forms of secure communication – and perhaps of greater interest – for studying the fundamental theories of physics. A nuclear clock could be as much as one-hundred times more accurate than current atomic clocks, which now serve as the basis for the global positioning system (GPS) and a broad range of important measurements.

“If you give people a better clock, they will use it,” said Alex Kuzmich, a professor in the School of Physics at the Georgia Institute of Technology and one of the paper’s co-authors. “For most applications, the atomic clocks we have are precise enough. But there are other applications where having a better clock would provide a real advantage.”

Early clocks used a swinging pendulum to provide the oscillations needed to track time. In modern clocks, quartz crystals provide high-frequency oscillations that act like a tuning fork, replacing the old-fashioned pendulum. Atomic clocks derive their accuracy from laser-induced oscillations of electrons in atoms. However, these electrons can be affected by magnetic and electrical fields, allowing atomic clocks to drift ever so slightly – about four seconds in the lifetime of the universe.

Because neutrons are much heavier than electrons and densely packed in the atomic nucleus, they are less susceptible to these perturbations than the electrons. A nuclear clock should therefore be less affected by environmental factors than its atomic cousin.

“In our paper, we show that by using lasers to orient the electrons in a very specific way, we can use the neutron of an atomic nucleus as the clock pendulum,” said Corey Campbell, a research scientist in the Kuzmich laboratory and the paper’s first author. “Because the neutron is held so tightly to the nucleus, its oscillation rate is almost completely unaffected by any external perturbations.”

To create the oscillations, the researchers plan to use a laser operating at petahertz frequencies — 10 (15) oscillations per second — to boost the nucleus of a thorium 229 ion into a higher energy state. Tuning a laser to create these higher energy states would allow scientists to set its frequency very precisely, and that frequency would be used to keep time instead of the tick of a clock or the swing of a pendulum.

The nuclear clock ion will need to be maintained at a very low temperature – tens of microkelvins – to keep it still. To produce and maintain such temperatures, physicists normally use laser cooling. But for this system, that would pose a problem because laser light is also used to create the timekeeping oscillations.

“The cooling ion acts as a refrigerator, keeping the clock ion very still,” said Alexander Radnaev, a graduate research assistant in the Kuzmich lab. “This is necessary to interrogate this clock ion for very long and to make a very accurate clock that will provide the next level of performance.”

Calculations suggest that a nuclear clock could be accurate to 10 (-19), compared to 10 (-17) for the best atomic clock.

Because they operate in slightly different ways, atomic clocks and nuclear clocks could one day be used together to examine differences in physical constants. “Some laws of physics may not be constant in time,” Kuzmich said. “Developing better clocks is a good way to study this.”

Though the research team believes it has now demonstrated the potential to make a nuclear clock – which was first proposed in 2003 – it will still be a while before they can produce a working one.

The major challenge ahead is that the exact frequency of the ultraviolet laser emissions needed to excite the thorium nucleus hasn’t yet been determined, despite the efforts of many different research groups.

But Kuzmich believes that that problem will be solved, allowing physicists to move to the next-generation of phenomenally accurate timekeepers.

“Our research shows that building a nuclear clock in this way is both worthwhile and feasible,” Kuzmich said. “We now have the tools and plans needed to move forward in realizing this system.”