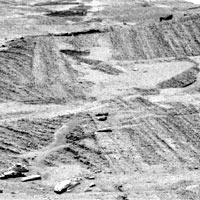 Researchers used a special imaging technique with the panoramic camera on NASA's Mars Exploration Rover Opportunity to get as detailed a look as possible at a target region near eastern foot of 'Burns Cliff.' The intervening terrain was too difficult for driving the rover closer.

Scientists have identified a water-signature mineral called goethite in bedrock that the NASA's Mars rover Spirit examined in the 'Columbia Hills,' one of the mission's surest indicators yet for a wet history on Spirit's side of Mars.

'Goethite, like the jarosite that Opportunity found on the other side of Mars, is strong evidence for water activity,' said Dr. Goestar Klingelhoefer of the University of Mainz, Germany, lead scientist for the iron-mineral analyzer on each rover, the Moessbauer spectrometer. Goethite forms only in the presence of water, whether in liquid, ice or gaseous form. Hematite, a mineral that had previously been identified in Columbia Hills bedrock, usually, but not always, forms in the presence of water.

The rovers' main purpose is to look for geological evidence of whether their landing regions were ever wet and possibly hospitable to life. The successful results so far -- with extended missions still underway -- advance a NASA goal of continuing Mars exploration by robots and, eventually, by humans, said Doug McCuistion, Mars Exploration Program Director at NASA Headquarters.

Klingelhoefer presented the new results from a rock in the 'West Spur' of Mars' 'Husband Hill' at a meeting of the American Geophysical Union in San Francisco this week.

Spirit has now driven past the West Spur to ascend Husband Hill itself. One remaining question is whether water was only underground or ever pooled above the surface, as it did at Opportunity's site. 'As we climb Husband Hill and characterize the rock record, we'll be looking for additional evidence that the materials were modified by ground water and searching for textural, mineralogical and chemical evidence that the rocks were formed in or modified by surface water,' said Dr. Ray Arvidson of Washington University in St. Louis, deputy principal investigator for the rover instruments.

The amount of worrisome friction in Spirit's right front wheel has been decreasing. Meanwhile, rover wranglers at NASA's Jet Propulsion Laboratory in Pasadena, Calif., continue to minimize use of that wheel by often letting it drag while the other five wheels drive. 'Babying that wheel seems to be helping,' said JPL's Jim Erickson, rover project manager. Both rovers continue working in good health about eight months after their primary three-month missions. 'Looks as though Spirit and Opportunity will still be with us when we celebrate the landing anniversaries in January,' Erickson said.

Opportunity has completed six months of inspecting the inside of 'Endurance Crater' and is ready to resume exploration of the broad plains of the Meridiani region. It has recently seen frost and clouds marking the seasonal changes on Mars. At this week's conference, rover science-team member Dr. Michael Wolff of the Brookfield, Wisconsin branch of the Boulder, Colorado-based Space Science Institute is reporting those and other atmospheric observations. 'We're seeing some spectacular clouds,' Wolff said. 'They are a dramatic reminder that you have weather on Mars. Some days are cloudy. Some are clear.'

A portion of Mars' water vapor is moving from the north pole toward the south pole during the current northern-summer and southern-winter period. The transient increase in atmospheric water at Meridiani, just south of the equator, plus low temperatures near the surface, contribute to appearance of the clouds and frost, Wolff said. Frost shows up some mornings on the rover itself. The possibility that it has a clumping effect on the accumulated dust on solar panels is under consideration as a factor in unexpected boosts of electric output from the panels.

As its last major endeavor inside Endurance Crater, Opportunity made a close inspection of rock layers exposed in a part of the crater wall called 'Burns Cliff.' Dr. Steve Squyres of Cornell University, Ithaca, N.Y., principal investigator for the rover instruments, said, 'In the lower portion of the cliff, the layers show very strong indications that they were last transported by wind, not by water like some layers higher up. The combination suggests that this was not a deep-water environment but more of a salt flat, alternately wet and dry.'

'A theory with mathematical beauty is more likely to be correct than an ugly one that fits some experimental data. God is a mathematician of a very high order, and He used very advanced mathematics in constructing the universe.'