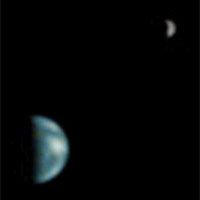 Earth and the Moon (in background), seen from Mars. Image taken by NASA's Mars Global Surveyor. Courtesy of NASA/JPL.

Have you ever wondered what you would see if you were on Mars looking at Earth through a small telescope? Now you can find out, thanks to a unique view of our world recently captured by NASA's Mars Global Surveyor spacecraft currently orbiting the red planet.

This first-ever image of its kind not only shows Mother Earth as a tiny alien world in the vast darkness of space, but also includes a view of the giant planet Jupiter and some of its larger moons. The camera aboard Mars Global Surveyor photographed both planets in an alignment, as seen in the evening sky of Mars, at 6 a.m. Pacific Time (9 a.m. EDT) on May 8, 2003.

'From our Mars orbital-camera perspective, we've spent the last six-and-a-half years staring at Mars right in front of us,' said Dr. Michael Malin, president and chief scientist of Malin Space Science Systems, of San Diego, who operates the camera aboard Mars Global Surveyor. 'Taking this picture allowed us to look up from that work of exploring Mars and take in a more panoramic view. This image gives us a new perspective on that neighborhood, one in which we can see our own planet as one among many.'

The image is available on the Internet at: http://photojournal.jpl.nasa.gov/catalog/PIA04531

The image of Earth actually shows our home as a planetary disc, in a 'half-Earth' phase. The image has been specially processed to allow both Earth and the much darker Moon to be visible together. The bright area at the top of the image of Earth is cloud cover over central and eastern North America. Below that, a darker area includes Central America and the Gulf of Mexico. The bright feature near the center-right of the crescent Earth consists of clouds over northern South America.

The image also shows the Earth-facing hemisphere of the Moon, since the Moon was on the far side of Earth as viewed from Mars. The slightly lighter tone of the lower portion of the image of the Moon results from the large and conspicuous ray system associated with the crater Tycho.

The image also shows Jupiter and three of its four Galilean moons: Callisto, Ganymede, and Europa. At the time, Jupiter's giant red spot had rotated out of view, and, the other so-called Galilean satellite, Io, was behind Jupiter as seen from Mars. This image has been specially processed to show both Jupiter and its satellites, since Jupiter was much brighter than the three satellites.

Mars Global Surveyor, one of the most successful missions to Mars ever undertaken, has been orbiting the red planet since September 1997. The mission has examined the entire martian surface and provided a wealth of information, including some stunning high-resolution imagery, about the planet's atmosphere and interior.

Evaluation of landing sites for NASA's two Mars Exploration Rover missions and the British Beagle 2 lander mission has relied heavily on mineral mapping, detailed imagery and topographic measurements by Mars Global Surveyor. NASA's Mars Exploration Rovers and the European Space Agency's Mars Express mission, which carries the Beagle 2 mission, are due to launch this summer and arrive at Mars in late December 2003 and January 2004.

More information about Mars Global Surveyor is available at http://mars.jpl.nasa.gov/mgs/.

The Jet Propulsion Laboratory in Pasadena, Calif., manages Mars Global Surveyor for NASA's Office of Space Science in Washington, D.C. JPL is a division of the California Institute of Technology in Pasadena. JPL's industrial partner is Lockheed Martin Astronautics, Denver, which developed and operates the spacecraft. Malin Space Science Systems and the California Institute of Technology built the Mars Orbiter Camera, and Malin Space Science Systems operates the camera from its facilities in San Diego, Calif.

'Arrows of hate have been shot at me too, but they have never hit me, because somehow they belonged to another world with which I have no connection whatsoever.'