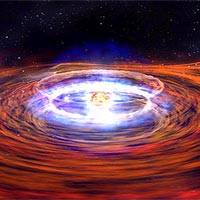 Computer artist's concept of a rare explosion on a neutron star, which is the dead core of a massive star.

Scientists at the Canadian Institute for Theoretical Astrophysics (CITA) and NASA have captured unprecedented details of the swirling flow of gas hovering just a few miles from the surface of a neutron star, itself a sphere only about ten miles (16 km) across.

A massive and rare explosion on the surface of this neutron star -- pouring out more energy in three hours than the Sun does in 100 years -- illuminated the region and allowed the scientists to spy on details never before revealed. They could see details as fine as the neutron star's accretion disk, a ring of gas swirling around and flowing onto the neutron star, as the disk buckled from the explosion and then slowly recovered its original form after approximately 1,000 seconds. (Image 2 shows an artist's concept of the accretion disk. Animation 1 and Images 1 - 6 are artist's concepts of this discovery.)

All of this was occurring 25,000 light years from Earth, captured second-by-second in movie-like fashion through a process called spectroscopy with NASA's Rossi X-ray Timing Explorer.

Dr. David Ballantyne of CITA at the University of Toronto and Dr. Tod Strohmayer of NASA's Goddard Space Flight Center in Greenbelt, Md., present this result in the current issue of Astrophysical Journal Letters. The observation provides new insight into the flow of a neutron star's (and perhaps a black hole's) accretion disk, which usually appears far too minute to resolve with even the most powerful telescopes.

"This is the first time we have been able to watch the inner regions of an accretion disk, in this case literally a few miles from the neutron star's surface, change its structure in real-time," said Ballantyne. "Accretion disks are known to flow around many objects in the Universe, from newly forming stars to the giant black holes in distant quasars. Details of how such a disk flows could only be inferred up to now."

A neutron star is the dense, core remains of an exploded star at least eight times more massive than the Sun. The neutron star contains about a sun's worth of mass packed in a sphere no larger than Toronto. In binary (double) star systems, gas from the companion star can funnel towards the neutron star, attracted by the neutron star's strong gravity. (In Image 1, the blue sphere represents the binary companion, and gas can be seen funneling toward the much smaller neutron star, which is embedded deep within the red accretion disk.)

As matter crashes down on the neutron star it builds up a 10- to 100-meter (yard) layer of material comprised mostly of helium. The fusion of the helium into carbon and other heavier elements releases enormous energy and powers a strong burst of X-ray light, far more energetic than visible light. Such bursts can occur several times a day on a neutron star and last for about 10 seconds. (Image 5 is a closeup of the neutron star, illustrating what the surface might look like as gas from its accretion disk piles up.)

What Ballantyne and Strohmayer observed on this neutron star, named 4U 1820-30, was a "superburst". These are much more rare than ordinary, helium-powered bursts and release a thousand times more energy. Scientists say these superbursts are caused by a buildup of nuclear ash in the form of carbon from the helium fusion. Current thinking suggests that it takes several years for the carbon ash to build up to such an extent that it begins to fuse. (Image 6 is a closeup of the neutron star during the superburst. Refer to Animation 1 for a movie of this process.)

The superburst was so bright and long that it acted like a spotlight beamed from the neutron star surface onto the innermost region of the accretion disk. The X-ray light from the burst illuminated iron atoms in the accretion disk, a process called fluorescence. The Rossi Explorer captured the characteristic signature of the iron fluorescence -- that is, its spectrum. This, in turn, provided information about the iron's temperature, velocity, and location around the neutron star. (Images 3 and 4 illustrate how the explosion might illuminate and distort the disk.)

"The Rossi Explorer can get a good measurement of the fluorescence spectrum of the iron atoms every few seconds," Strohmayer said. "Adding up all this information, we get a picture of how this accretion disk is being deformed by the thermonuclear blast. This is the best look we can hope to get, because the resolution needed to actually see this action as an image, instead of spectra, would be a billion times greater than what the Hubble Space Telescope offers."

The Canadian Institute for Theoretical Astrophysics is a nationally supported research center, hosted by the University of Toronto. CITA receives research support through a grant from the Natural Science and Engineering Research Council of Canada and the Canadian Institute for Advanced Research. CITA's primary missions are to foster interaction within the Canadian astrophysics community and to serve as an international center of excellence for theoretical studies in astrophysics.

'You cannot hope to build a better world without improving the individuals. To that end each of us must work for his own improvement, and at the same time share a general responsibility for all humanity, our particular duty being to aid those to whom we think we can be most useful.'