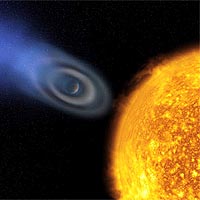 This artist’s impression shows an extended ellipsoidal envelope - the shape of a rugby-ball – of oxygen and carbon discovered around the well-known extrasolar planet HD 209458b.

An international team of astronomers led by Alfred Vidal-Madjar (Institut d’Astrophysique de Paris, CNRS, France) observed the first signs of oxygen and carbon in the atmosphere of a planet beyond our Solar System for the first time using the NASA/ESA Hubble Space Telescope.

The atoms of carbon and oxygen are swept up from the lower atmosphere with the flow of escaping atmospheric atomic hydrogen - like dust in a supersonic whirlwind – in a process called atmospheric ‘blow off’.

The well-known extrasolar planet HD 209458b, provisionally nicknamed Osiris, has surprised astronomers again. Oxygen and carbon have been found in its atmosphere, evaporating at such an immense rate that the existence of a new class of extrasolar planets – ‘the chthonian planets’ or ‘dead’ cores of completely evaporated gas giants - has been proposed.

Oxygen and carbon have been detected in the atmosphere of a planet beyond our Solar System for the first time. Scientists using the NASA/ESA Hubble Space Telescope have observed the famous extrasolar planet HD 209458b passing in front of its parent star, and found oxygen and carbon surrounding the planet in an extended ellipsoidal envelope - the shape of a rugby-ball. These atoms are swept up from the lower atmosphere with the flow of the escaping atmospheric atomic hydrogen, like dust in a supersonic whirlwind.

The planet, called HD 209458b, may sound familiar. It is already an extrasolar planet with an astounding list of firsts: the first extrasolar planet discovered transiting its sun, the first with an atmosphere, the first observed to have an evaporating hydrogen atmosphere (in 2003 by the same team of scientists) and now the first to have an atmosphere containing oxygen and carbon. Furthermore the ‘blow-off’ effect observed by the team during their October and November 2003 observations with Hubble had never been seen before.

In honour of such a distinguished catalogue this extraordinary extrasolar planet has provisionally been dubbed "Osiris". Osiris is the Egyptian god who lost part of his body – like HD 209458b - after his brother killed and cut him into pieces to prevent his return to life.

Oxygen is one of the possible indicators of life that is often looked for in experiments searching for extraterrestrial life (such as those onboard the Viking probes and the Spirit and Opportunity rovers), but according to Vidal-Madjar: "Naturally this sounds exciting - the possibility of life on Osiris - but it is not a big surprise as oxygen is also present in the giant planets of our Solar System, like Jupiter and Saturn".

What, on the other hand was surprising was to find the carbon and oxygen atoms surrounding the planet in an extended envelope. Although carbon and oxygen have been observed on Jupiter and Saturn, it is always in combined form as methane and water deep in the atmosphere. In HD 209458b the chemicals are broken down into the basic elements. But on Jupiter or Saturn, even as elements, they would still remain invisible low in the atmosphere. The fact that they are visible in the upper atmosphere of HD 209458b confirms that atmospheric ‘blow off’ is occurring.

The scorched Osiris orbits ‘only’ 7 million kilometres from its yellow Sun-like star and its surface is heated to about 1,000 degrees Celsius.

Whereas hydrogen is a very light element - the lightest in fact - oxygen and carbon are much heavier in comparison. This has enabled scientists to conclude that this phenomenon is more efficient than simple evaporation. The gas is essentially ripped away at a speed of more than 35,000 km/hour. "We speculate that even heavier elements such as iron are blown off at this stage as well" says team member Alain Lecavelier des Etangs (Institut d'Astrophysique de Paris, CNRS, France).

The whole evaporation mechanism is so distinctive that there is reason to propose the existence of a new class of extrasolar planets - the chthonian planets, a reference to the Greek God Khtôn, used for Greek deities from the hot infernal underworld (also used in the French word autochton). The chthonian planets are thought to be the solid remnant cores of ‘evaporated gas giants’, orbiting even closer to their parent star than Osiris. The detection of these planets should soon be within reach of current telescopes both on the ground and in space.

The discovery of the fierce evaporation process is, according to the scientists, "highly unusual", but may indirectly confirm theories of our own Earth’s childhood. "This is a unique case in which such a hydrodynamic escape is directly observed. It has been speculated that Venus, Earth and Mars may have lost their entire original atmospheres during the early part of their lives. Their present atmospheres have their origins in asteroid and cometary impacts and outgassing from the planet interiors", says Vidal-Madjar.

'The strength and weakness of physicists is that we believe in what we can measure. And if we can't measure it, then we say it probably doesn't exist. And that closes us off to an enormous amount of phenomena that we may not be able to measure because they only happened once. For example, the Big Bang. ... That's one reason why they scoffed at higher dimensions for so many years. Now we realize that there's no alternative... '